To the moon! Or through the woods... 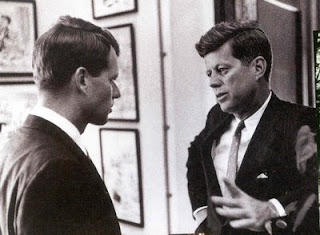 President John F. Kennedy was never one to shy away from challenging the American people. He asked us what we could do for our country, and he asked us to go to the moon. In 1963 he asked Americans to challenge their physical fitness, and in doing so, inspire others to do the same.

This Saturday, for the 45th time, more than 1000 people will line up in Hagerstown, Maryland to run the JFK 50 Miler -- 50 miles on the Appalachian Trail.

One of the first people to cover the distance was the president's brother, Attorney General Robert F. Kennedy, in 17 hours. The current record for men's finishers in 5 hours and 46 minutes.

Following the race I will have a first hand account from my brother, who shares the 35th president's boldfaced disregard for what passes as impossible in this world.

Hope the wind's at your back and the roots keep flat, brother.

Dispatches from the corner of Grant & Washington.
More to come...
Posted by sevprez No comments: