I think I can finally talk about it, the epic LOST finale. It was a doozy. Tears were shed (VINCENT!!!). Jate happened. I wasn't one of those people who falsely believed that everything on the island didn't actually occur (only the sideways timeline was purgatory, folks!), so I was satisfied with the ending, even if it did take me 24 hours to process.


I watched the finale event with my very good friend who aided and abetted my recently acquired LOST obsession by giving me a 45 minute amazingly detailed series synopsis back in February. And although our get together doesn't technically qualify as a LOST party — we didn't have a Dharma Initiative cake or anything — I did try and go with the theme a bit. We had margaritas (I'll take any excuse) with umbrellas, vegan tacos (because we probably wouldn't have been able to stomach hunting for our own boar), and of course, mangos with lime juice and chili powder. I think a mango was eaten in every episode. 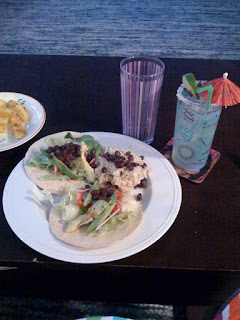 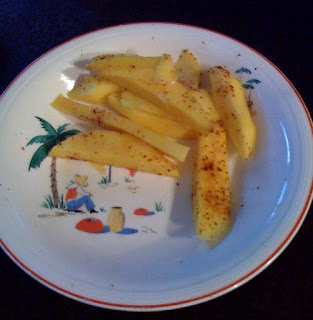 Oh and I picked some honeysuckle vines from our hedge so we could have floral arrangements evocative of the jungle! 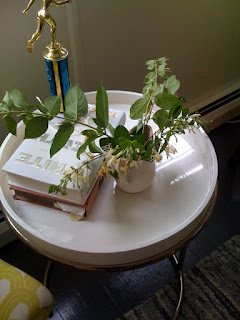 I watched the end of the finale again the other night and was literally weeping. Jack, I'll miss you buddy.
Posted by sevprez 1 comment: 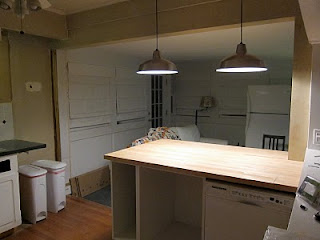 I happy to report that Mr. SevPrez loves butchers block as much as I do, if not more. I am lucky that he trusts my offbeat taste!
Posted by sevprez 3 comments:

Email ThisBlogThis!Share to TwitterShare to FacebookShare to Pinterest
Labels: Design, Marriage, points for the suburbs

Yesterday I dove into a wormhole after Scottish poet Kathleen Jamie* and wanted never to emerge. Great poetry pierces the heart of everything.


Is this what church is supposed to do?


Jamie wrote, "When we were young, we were told that poetry is about voice, about finding a voice and speaking with this voice, but the older I get I think it's not about voice, it's about listening and the art of listening, listening with attention. I don't just mean with the ear, bringing the quality of attention to the world. The writers I like best are those who attend."


I found this poem of hers, which I wanted to share with you, because it doesn't require too much parsing. It's a poem you don't have to think about, you just have to open yourself up to feel. Maybe poetry is like church — and hallucinogens.


The Way We Live
by Kathleen Jamie


Pass the tambourine, let me bash out praises

to the Lord God of movement, to Absolute
non-friction, flight, and the scarey side:
death by avalanche, birth by failed contraception.
Of chicken tandoori and reggae, loud, from tenements,
commitment, driving fast and unswerving
friendship. Of tee-shirts on pulleys, giros and Bombay,
barmen, dreaming waitresses with many fake-gold
bangles. Of airports, impulse, and waking to uncertainty,
to strip-lights, motorways, or that pantheon -
the mountains. To overdrafts and grafting
and the fit slow pulse of wipers as you're
creeping over Rannoch, while the God of moorland
walks abroad with his entourage of freezing fog,
his bodyguard of snow.
Of endless gloaming in the North, of Asiatic swelter,
to launderettes, anecdotes, passions and exhaustion,
Final Demands and dead men, the skeletal grip
of government. To misery and elation; mixed,
the sod and caprice of landlords.
To the way it fits, the way it is, the way it seems
to be: let me bash out praises - pass the tambourine.
From Mr. & Mrs. Scotland are Dead: Poems 1980-1994 (Bloodaxe Books).
The end reminded me of the poem/performance piece called "Shout Out," by Sekou Sundiata. Here's a snippet:
Here’s to the best words
In the right place
At the perfect time
To the human mind blown-up
And refined...
To the was you been to the is you in,
To what’s deep and deep to what’s down and down
To the lost, and the blind, and the almost found.
Two different beasts, both walking the same path up the mountain — Cold Mountain?

Clambering up the Cold Mountain path,
The Cold Mountain trail goes on and on:
The long gorge choked with scree and boulders,
The wide creek, the mist blurred grass.
The moss is slippery, though there's been no rain
The pine sings, but there's no wind.
Who can leap the world's ties
And sit with me amoung the white clouds?

Han Shan translated by Gary Snyder, from Riprap and Cold Mountain Poems.
This morning the Daily Dharma told me that even Buddhism — the put-it-in-quotation-marks religion — is based on faith, a profound faith in the enlightenment of the buddha, that "human nature, all existence, is intrinsically whole, flawless, omnipotent — in a word, perfect."
Amen.

*It's been written about Kathleen Jamie that she is "somewhere between the Presbyterian and the Tao." An excellent place to be.
Posted by sevprez 3 comments:

The Kitchen Fun Has Begun! 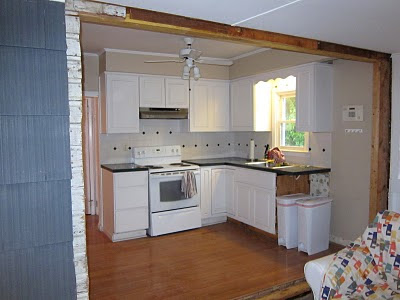 And it's not really that messy, either. I was so nervous on the way home I was nearly catatonic.


For the night we decided we should move our sofa so that we could watch a little TV, and the only place to put it was next to the fridge, which is now in the den. It's an arrangement uncomfortably similar to a beer commercial. 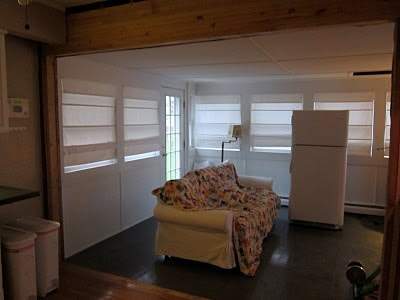 Email ThisBlogThis!Share to TwitterShare to FacebookShare to Pinterest
Labels: Design, points for the suburbs

Giving Back To (And For) Mom

I hope you've already taken care of your Mother's Day shopping already, but if you haven't, I have just the thing. If your mother is anything like mine, she has a lot of stuff. Shopping for her can be tough, so I always try for something meaningful. This year I was truly stumped until I received a timely email from Doctors Without Borders (or Medicins Sans Frontieres, as they are known internationally). The SevPrez family donated to them during the Haitian Earthquake disaster, as they were one of the first international aid organizations on the ground to be up and running. But they do really amazing work all around the globe, natural disaster or not.


They have a great idea: donate in the name of your mother. Your mom will be so impressed that she raised such a magnanimous and thoughtful global citizen, you will feel good about yourself that you are not just contributing to your mom's mug collection, and a mother and child somewhere on this planet will benefit from your small (or large donation.) Win win win. 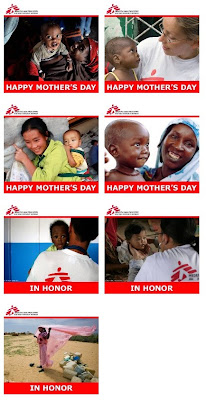 They even have these really sweet eCards to choose from. Maybe you should consider this option, even if you already bought the #1 Mom mug.
Posted by sevprez 1 comment:

The Flux of Stuff 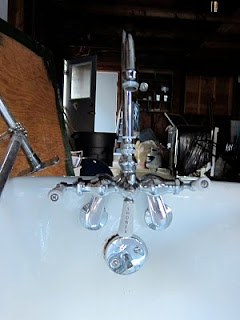 Two Saturdays ago I managed to participate in a town-wide garage sale without buying anything of anyone else's. I was pretty impressed with myself.


When my friend asked me if I had anything to bring to her sale, I jumped at the chance, thinking of all the things in my gigantic garage (oh yeah, I have a tiny house and a gigantic garage, have I ever told you that?). I was pretty disgusted with all the things that have been sitting in there for as long as two and a half years, still in boxes from when we moved from Brooklyn. I packed my car to the gills in the morning, and swore I none of it would ever come back. Still, I enjoyed my time so much at the garage sale that I haven't been able to bring myself to donate my leftover possessions. I'm considering setting up a corner of the garage for future sales.


I did manage to barter a really cute tray of mine for a really cute sundress (with the tags still on!). Aside from the excellent company, that's definitely the upside of having a garage sale with like-minded individuals!


There was one new item that ended up in my garage at the end of the day — a clawfoot tub. It just so happened that Saturday was also the day that my brother the architect called us over to a beautiful old house he was working on to pick through the items that were removed from the house. We got a great dishwasher for our kitchen reno (which hasn't started yet, I'll keep you posted), but I couldn't leave without the tub. I'm hoping it will eventually replace our funny green tub in our funny little bathroom that we don't currently have the money to redo. Until then, maybe I can use it to store various items that are waiting to be sold in the next tag sale. 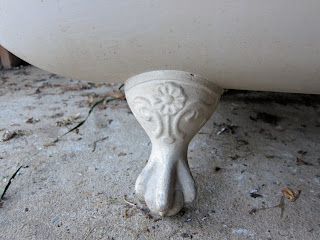 Email ThisBlogThis!Share to TwitterShare to FacebookShare to Pinterest
Labels: points for the suburbs, Shopping

Don't you love it when your friends do things that impress and inspire you? You get happy for them for being so fantastic, and you get happy for yourself for having such great friends. Well here's an example — my college roommate has gone on to become a city planner and started her own company, The Planning Collective, with fellow graduates of her UPenn masters program. They are making things happen in Philadelphia, and they will make some more things happen if you vote for them on Pepsi's Refresh Everything website.