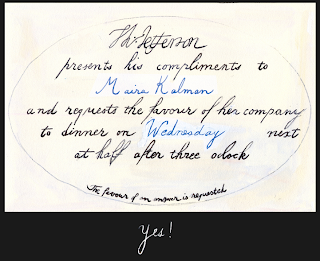 Go check out Maira Kalman's Pursuit of Happiness blog today, and read about another generalist, our third president, Thomas Jefferson. I was never a big fan of him (I'm more of an Adams lady, myself, and before the mini-series, thank you very much), until I heard about how he used to cut out the passages of the Bible that didn't agree with him, which resulted in The Jefferson Bible.

He felt that the deification of Jesus by the writers of the New Testament polluted his understanding of the faith. Of his undertaking, he stated, "There will be found remaining the most sublime and benevolent code of morals which has ever been offered to man. I have performed this operation for my own use, by cutting verse by verse out of the printed book, and arranging the matter which is evidently his, and which is as easily distinguishable as diamonds in a dunghill."

(The question needs to be asked: did he use two hard copies of the Bible when clipping? Because what if there was something worth keeping on the backside of a piece that had to go?)

Although I recognize that faith of any kind involves one person's acceptance of something she cannot see with her own eyes but chooses to believe as true, I don't think faith means we should accept things unquestioningly. That which we put our faith in should ring true to our inner spiritual bell. To stop listening for our inner spiritual bell is, in my opinion, to forfeit our agency in this world, making us a burden someone else must carry. And when people have to carry around a lot of dead weight, they get cranky and resentful, and then, well you know all the unpleasant stuff that happens after that.

For me, my problems with Christianity as a belief system begin and end with Jesus and the way in which most denominations (the most notable exception being Unitarians) worship the man for his message. I say serve the message, recognize the source, be grateful, be humble, and go forward and practice the teachings to the best of your ability.

To take a cue from another great faith, in Sanskrit, "buddha" means awakened one, even though in popular culture it most often refers to one buddha in particular, Siddhartha Gautama, the founder of Buddhism. Even in language alone, Buddhism invites us to believe that with steps down the right path, the inner life of the Buddha is available to anyone of us. That elicits a ring-a-ling-ling inside of me, and gives me faith in myself and my fellow man.

No religion or belief system is better than another or none at all: each day the challenge for us is to stay honest with ourselves and be responsible for our actions, whether they are rooted in faith or not. 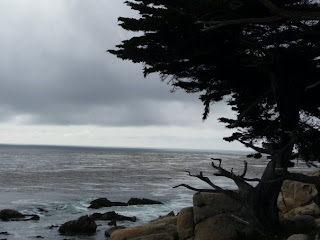 After I arrived in Berkeley Friday night and caught up with my old roommate over a bottle of California white, Saturday morning we were off to Monterey and Pebble Beach, or more specifically, the road inbetween, 17 Mile Drive. We drove amidst the cypress trees, golf courses, and mansions that are probably only inhabited for a month a year. We took lots of pictures, and dreamed of being rich.
On Route 1, heading South. California is such an advertisement for itself. I felt compelled to shout "I'm in California!" several times a day. 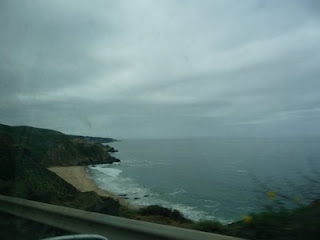 Our first stop on the rocky coast. My roommate looking mysterious, befitting the weather. 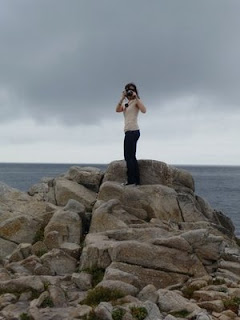 Winding through the Cypress Forest. 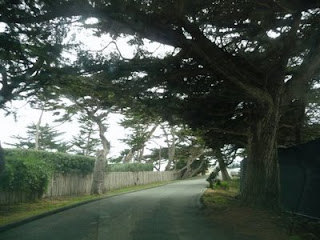 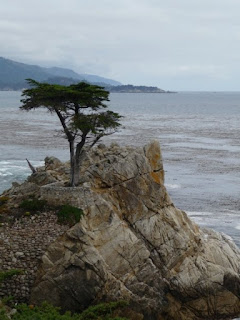 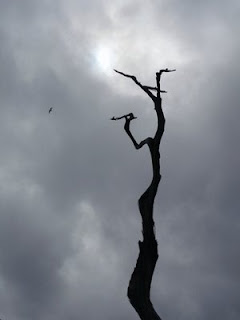 It was utterly fabulous. Post to follow about Spanish Bay Inn, one of the Pebble Beach resorts on the route. Stay tuned.
Posted by sevprez 1 comment:

California, I'm Coming... For A Visit 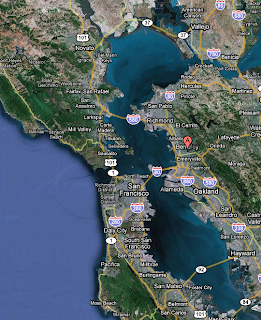 And listening to Joni Mitchell on the flight out.
I've been meaning to post about our anniversary visit to our favorite B&B, but it's been a crazy week. Hope to get it out to you when I get back. That, and some Bay Area best bets.
For now I will recommend an awesome song that I just discovered, called "A Little More Time" by John Doe, off his album "A Year in the Wilderness." It's beautiful and I'm hoping I can get my brother to add it to his acoustic repertoire.
Speaking of which, So Watt is playing at the Brickwall tomorrow night at 9. Go and make up for my absence!
Posted by sevprez No comments:

Email ThisBlogThis!Share to TwitterShare to FacebookShare to Pinterest
Labels: Blogging, So Watt, Travel

Who Are These Philipians, Anyway?* 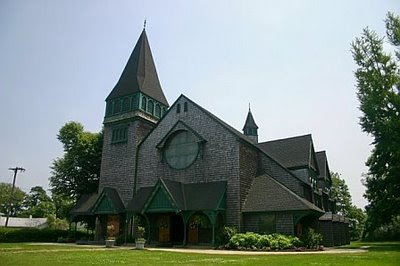 By now faithful readers know that my spiritual quest does not often lead to church.
However, when I do spend time below the cross, I do it at the place Mr. SevPrez and I were married, two years ago to the day. Elberon Memorial Church, in Long Branch, NJ, is a non-denominational summer church founded more than one hundred years ago for the use of vacationers at the Jersey Shore. It's a big old gorgeous church, located about a block from ocean. Several preachers from the area take turns giving services on summer Sundays starting in July, and great music is played by renowned area musicians.
Since our wedding was being held in a church (albeit one with, thankfully, limited "churchiness"), and performed by a minister, we were encouraged to include a passage from the Bible in our ceremony. I didn't fight this too much, because even though it's personally not my favorite book, it is a pretty powerful one, so I was pretty sure we'd be able to find something meaningful to both of us besides Corinthians 1:13 ("love is patient, love is kind..."). That's one of those passages that gave me goosebumps the first time I heard it, but because of my job, and because we went to six weddings last year, has begun to ring hollow from overuse.
So after a bit of research, we chose Paul's letter to the Philippians. Our minister, who'd been in the business of performing weddings for several decades, professed he'd never used this passage in a wedding before, but he liked it a lot. So much, in fact, that three months later, when he got married, he used it for his ceremony. (You have to know how much it pleased me. They don't call me the quote master for nothing!) It reads:
"...Whatever is true, whatever is honorable, whatever is right, whatever is pure, whatever is lovely, whatever is of good repute, if there is any excellence and if anything worthy of praise, dwell on these things.
The things you have learned and received and heard and seen in me, practice these things, and the God of love will be with you."
(Philipians 4, New American Standard Bible)
It's another way of expressing one of my most closely held tenants: you gotta keep on the bright side of things. But don't get carried away. Never forget to pack sunscreen. 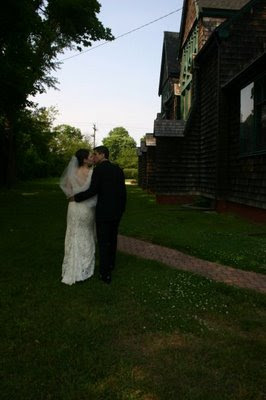 *Philipi was a town in what is now mainland Greece, though at the time it was Macedonia, under Roman rule. Paul wrote this letter from jail to the Christian community he had converted there, basically telling them to keep the faith in hard times.

Yielded one delightful arrangement of flowers, however if we don't trim it at a faster pace, I fear it will tip over... 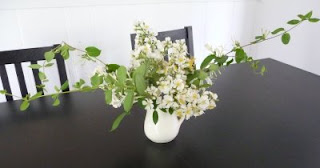 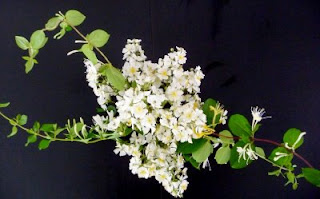